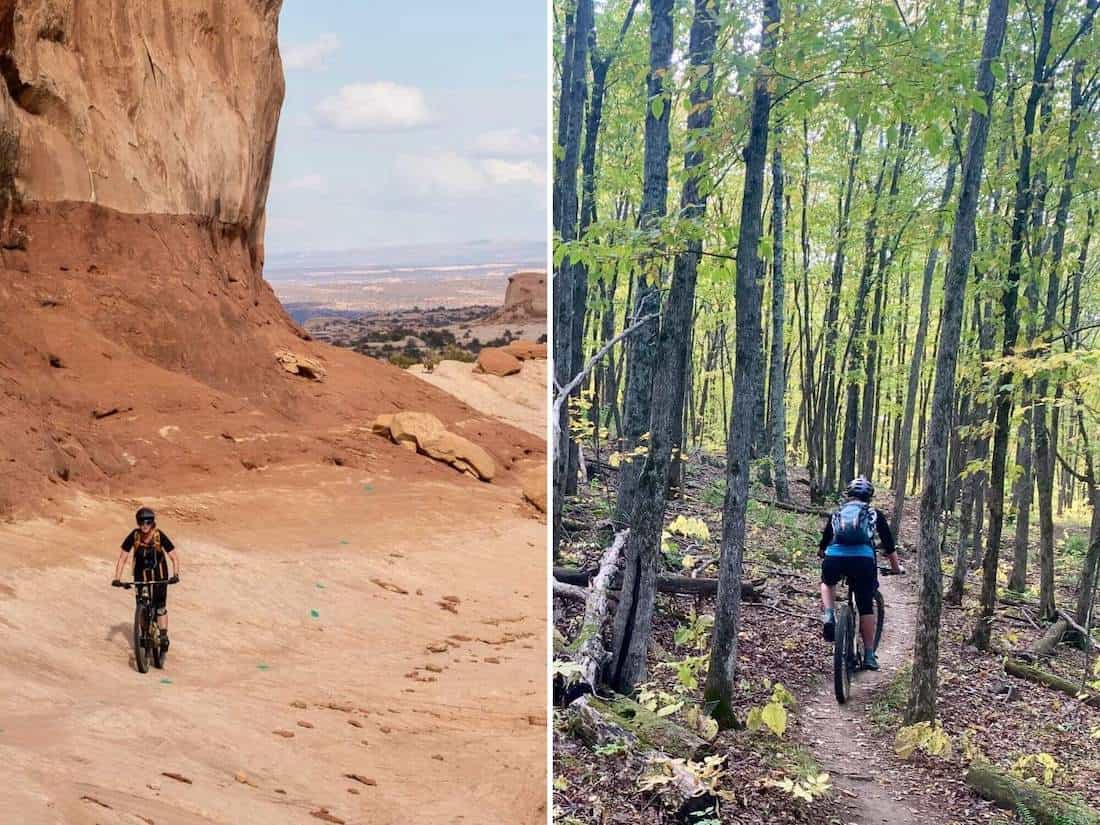 There are a lot of opinions out there in the mountain biking world and some can get pretty heated: 27.5” wheels or 29”? Flats or clipless? Fanny pack or backpack? It seems like every rider has an opinion and their opinion is the right one (just Google ‘clipless vs flats’ and you’ll see what I mean). So what about East Coast mountain biking vs West Coast mountain biking? Which one has better trails?

I think this is a worthy debate, although most mountain bikers can probably agree that the best trails are the ones they’re riding right now.

West coast mountain biking cannot be put into a box. There is a little bit of everything from high alpine singletrack traverses that wind through wildflower studded meadows to oceanside trails with big views out to sea.

There’s also desert singletrack lined with cacti and temperate rainforest trails brimming with vegetation. Simply put, west coast riding is incredibly varied and within the span of one road trip, you could ride the desert in Arizona, the Rockies in Utah, and the lush forests of Oregon and Washington.

The style of riding out west is also very different from east coast mountain biking. Out west, the trails are mostly on public lands with long climbs and fun, fast, flowy descents. There can be a ton of tech on the trails in the form of rock gardens and man-made features or the trails could be smooth and buff. There’s also the famous slickrock riding in Utah with huge slabs of pure rock trail.

As for views, west coast riding beats out east coast riding any day of the week. With trails that look out over Zion National Park, the Puget Sound, and the Rocky Mountains, among other impressive sights, mountain biking in the west is never dull.

East coast mountain biking is quite a bit different than west coast riding. Out east, you’ll find twisty, turny mountain bike networks with trails that cut back on themselves again and again.

Since most east coast mountain bike trails are on private land and there are way less open lands than out west, east coast trail builders need to maximize the land and terrain they have to work with. This could mean 8 miles of trail in 3 square miles of terrain.

And there are roots. Lots and lots of roots. Unless you’re riding machine-built trails where all the roots have been removed, expect to bounce and roll over wet and slippery roots everywhere you go on the east coast. If there aren’t roots, then there will be rocks. Sharp, jolting, wrist-jarring rocks.

These trail obstacles make east coast mountain biking more challenging than a lot of west coast riding because you’re constantly pushing the pedals hard to roll up and over a rock feature or using your arm strength to keep the handlebars in control over rooty sections.

I’m not complaining about east coast riding because there are some super fun places to ride a bike out east, but sometimes I wish it wasn’t so rocky and rooty…

Another thing to keep in mind about east coast riding is that the climbs and descents are much shorter. The east coast doesn’t have the mountainous terrain that the west coast does, so you won’t get those 2-hour long descents.

So Which is better?

Truthfully, I love all mountain biking, whether it be rolling over rocks and roots on the east coast or bombing down a flowy ridgeline descent on the west coast.

But if I had to choose one over the other, I would choose the west coast simply because there is more trail variety, bigger networks to ride, and the views are simply breathtaking.

But that being said, east coast mountain biking is super engaging and technical and the views are stunning in their own east coast way.

I wouldn’t say one is better than the other, they’re just very different and if you get the chance, definitely ride both as much as you can!