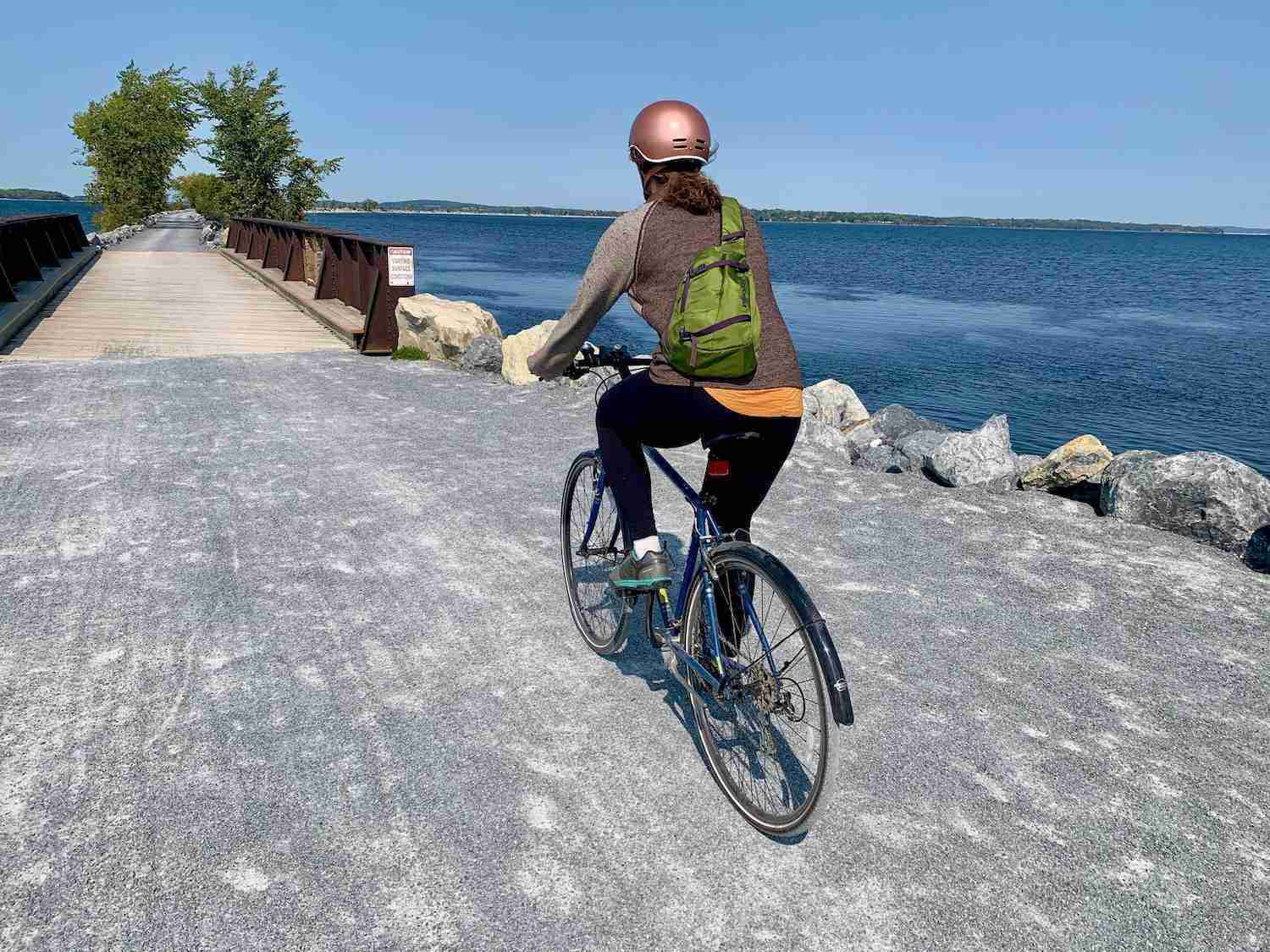 There are hidden beaches to swim from, rocky ledges to sunbathe on, hiking trails to explore, and even a bike ferry to transport you and your bike past the Colchester Causeway split so that you can continue your journey into South Hero.

How long is the Burlington bike path?

Together, these two off-road cycling paths extend 28 miles from Oakledge Park south of Burlington to South Hero in the north.

Record all your bike maintenance, fixes, and tune-ups so you can spend more time out on the trail or road.

The first 9 miles of the Burlington Bike Path are paved from Oakledge Park to Airport Park in Colchester. Once on the Colchester Causeway, the path turns to gravel all the way out to the Causeway.

It’s still possible to ride a road bike on the gravel path, but slightly wider tires – like a gravel bike – would be ideal.

Where to start & end

The Burlington bike path starts at Oakledge Park south of Burlington and ends at Delta Park near the Winooski River.

The Local Motion Bike Shop is located right on the bike path across from the Ferry Dock Marina in Burlington. They have a huge fleet of bike rentals including adult bikes, e-bikes, tandems, kids bikes, and tow-alongs.

Local Motion has also been instrumental in helping Burlington develop more bike-friendly streets and they were the folks behind getting the bike ferry up and running. I highly recommend renting from them so they can use the funds to do more two-wheeled good in the community!

The bike ferry allows riders to transit the ‘Cut’ in the Colchester Causeway. The Cut is a wide opening in the Causeway that allows boat traffic in and out of Mallets Bay from Lake Champlain. While it’s only another mile from the Cut to the end of the 14-mile Island Line Rail Trail in South Hero, the bike ferry allows commuters and riders to pass freely.

The bike ferry, also run by Local Motion, operates every day throughout the summer and on weekends during the fall. It is free to use, but they gladly accept donations to keep it up and running.

In 1899, the Rutland-Canadian Railroad built the Island Line Railway as a direct connection between Southern New England and Lake Ontario. The last Island Line train ran in 1961 and in the early 1980’s residents of Burlington began to rally around the idea of turning the old railway into a trail.

Since then, there has been incredible community support surrounding the Island Line Rail Trail. There was an initial bike ferry that crossed the Winooski River until 2004 when the Burlington & Colchester Trail Bridge officially opened.

A second ferry was launched in 2005 to span the 200ft cut that separates the Colchester Causeway from the Lake Champlain Islands. Today, the Local Motion Bike Ferry carries well over 300 passengers a day and provides trail access from Burlington to the beautiful Champlain Islands.

There are a number of fun stops and interesting sights along the Burlington Bike Path. Starting at Oakledge Park, these are a few of my favorite sights and places to eat along the way.

Before you start your ride, get your ‘kid’ on and go play in the circular treehouse at Oakledge Park!

Also located in Oakledge Park, the Burlington Earth Clock is a round circle of standing stones. Kind of like Stonehenge on a much smaller scale.

“The Earth Clock measures the sun’s journey north and south along the horizon through the cycle of seasons.  In the center of the circle is a sundial.  When you stand on the dateline in the center of the sundial, your shadow tells the time of day.” – BCA Website

The ECHO Leahy Center for Lake Champlain is a hands-on nature museum that is worth a stop especially if you have kids. Learn about the history of the lake, view the live animal exhibit, and experience the “joy of scientific discovery and wonder of nature.”

This beautiful beach is located just a few miles outside of Burlington and right off the bike path. The sandy beach stretches for several miles in either direction and during the peak summer months, it’s one of the most popular places to be.

Just past North Beach, there is a small park on the left with rock steps leading up into the forest. This is Rock Point and it’s a beautiful place to stroll around on the forested paths. The land is owned by the Episcopal Church of Burlington, but they welcome walkers and hikers. No bikes are allowed, so be sure to bring a lock.

The Burlington Bike Path ends at Delta Park just past the Winooski River. You’ll cross over the Burlington & Colchester Trail Bridge and then coast along an elevated boardwalk that winds through Delta Park. If you’re into birding, this is a great place to spot blue herons and other wildlife.

Eventually, the forest to either side of the trail will drop away and you will enter onto the Causeway. The Causeway is a long, narrow stretch of trail that is bordered on one side with Lake Champlain and on the other side with Mallets Bay. It is stunningly beautiful. It can get breezy and chilly on the Causeway, so pack a light jacket.

The Causeway has a break in it to allow boats to enter Mallets Bay, so in order for cyclists to finish the final mile of the Island Line Rail Trail, there’s a bike ferry to shuttle them across.

The bike ferry operates every day throughout the summer and on weekends during the fall. It is free to use, but they gladly accept donations to keep it up and running.

If you’re looking for some fuel, here are a few great places to grab a meal or snack on the Burlington Bike Path

Have you ridden the Burlington Bike Path or Island Line Rail Trail? What were your favorite stops and sights along the way? Leave a comment below!

Consider ‘buying me a coffee!’

I love hearing from you and appreciate your comments! However, if you leave a rude, unconstructive, or spammy comment, it will be deleted. It’s cool to be kind. Have an awesome day!

A mountain bike coach, two-wheeled devotee, and travel addict with a mission to help YOU explore the world on two wheels.