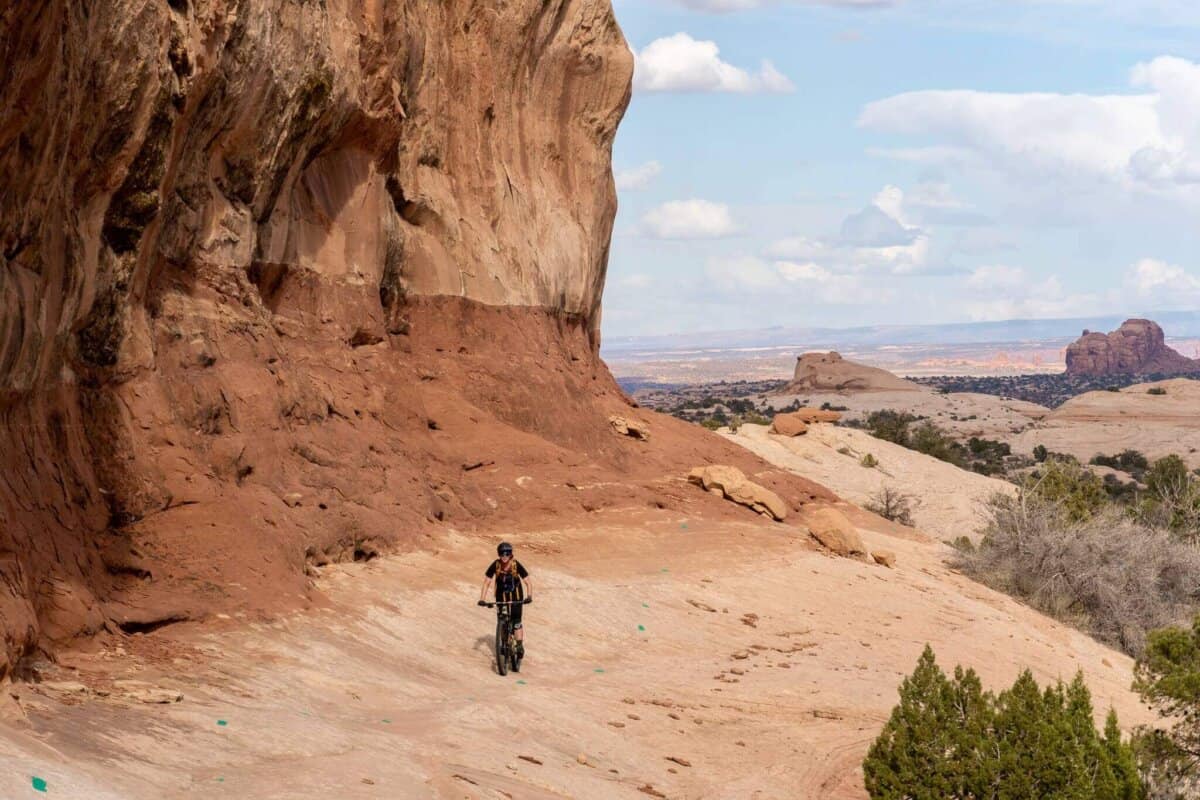 If you haven’t heard, Utah is home to some of the best – if not the best – mountain biking singletrack in the United States. In fact, I argue that Utah is king when it comes to which state has the best riding.

What makes mountain biking in Utah so special? The terrain for one. Trails in Utah are wildly diverse (not to mention beautiful) and there is almost endless opportunity for riding in every corner of the state. From the loamy, forested singletrack around Park City to the red slickrock in Moab, Utah is one of the best destinations in the United States for mountain bike enthusiasts.

If you’re ready to start planning your Utah road trip, here are the top 5 mountain bike destinations to put on your list.

Moab is probably one of – if not the – most iconic mountain bike destinations in the US and also in Utah. Almost every mountain biker has seen pictures from the iconic Whole Enchilada descent in the La Sal mountains or heard of other popular trails like the Slickrock Trail and Captain Ahab (my personal fave!).

Moab definitely has a lot going on when it comes to mountain biking and you could easily spend a week there and not touch every trail network or make a dent in the 1,000+ miles of trail.

Read next: A complete guide to mountain biking in Moab

The small town of Moab is also situated nicely next to two National Parks – Canyonlands National Park and Arches National Park – as well as the beautiful (but sadly name) Dead Horse Point State Park and the lazy green Colorado River.

Whatever your outdoor adventure agenda involves, Moab is definitely worth a visit.

Even though Moab is full of mountain bike magic, I personally prefer the St. George/Hurricane region on the western side of the state. This area also has incredible riding and jaw-dropping views, but minus the crowds (though it is getting found out…)

Gooseberry Mesa is one of the most popular networks in Hurricane. It’s full of punchy slickrock climbs and fast-rolling descents with incredible views out over Zion National Park. A pedal out to Gooseberry Point is a definite must!

Read next: A complete guide to mountain biking in Hurricane

My favorite network around Hurricane, however, is Guacamole. It’s a bit of a trek to get out there, but 100% worth it for the views and engaging trail riding.

The mountain bike trails around St. George, which is about 20 minutes west of Hurricane, aren’t quite as fun in my opinion but if you’re in the area and have an extra day or two, they are worth checking out. The Santa Clara Preserve is where all the best riding is.

One of my all-time favorite trails is in Cedar City: Blow hard. It’s a 7-mile shuttled descent down Blowhard Mountain above Cedar City and it is a blast (if you like the raw, rough, old-school kind of stuff...)

Cedar City is a bit under the radar for Utah mountain biking, but it has some of the best purpose-built singletrack in the state, and more is getting put in each season.

The Iron Hills Trail System right outside town is the most popular network with super fun riding and easy-to-lap loops. Lichen It is one of the best-routed climb trails I’ve ever ridden.

A bit further afield is Brian Head Resort with its lift-served bike park and dozens of miles of backcountry bike trails. I haven’t ridden the Brian Head Resort Bike Park, but it looks super fun! As for the surrounding backcountry trails, you may have seen pictures of the popular Thunder Mountain loop, but if you haven’t – Google it. The pics will make you want to ride it asap. The terrain is a mix of the red dirt Sedona trails and the majestic views of Bryce Canyon.

The riding around Park City is almost limitless. There are three bike parks, two skills parks, and over 600 individual trails totaling well over 100,000 miles of singletrack (and that’s not even counting the networks in nearby Salt Lake City). Holy moly. If only it didn’t snow in the winter, I would call it home…

The most popular bike park in Park City is Deer Valley with professionally built flow trails, old school cross-country tracks, freeride zones with manmade features, jump lines, and more. There’s something for every level of skill and rider at Deer Valley.

Adjacent to the Deer Valley bike park is Park City Mountain Resort, which is a Gold-Level IMBA riding area (which means it’s kind of a big deal). Here you’ll find the famous Wasatch Crest Trail and miles upon miles of singletrack from legit DH lines to beginner-friendly routes.

Park City should definitely be on your Utah mountain biking wish list!

Salt Lake City could technically be bundled into Park City’s terrain, but the area is big enough to warrant a shout-out to both cities. The most popular Salt Lake City mountain bike network is Corner Canyon just south of town. It’s an amazing network with trails suited for all levels from beginner trails to big features that I will probably never ride. Lambert Park is connected by the Three Falls Trail and is a great place for intermediate riders.

And if you want a unique riding experience, head over to Antelope Island in the Great Salt Lake. You can drive there on the Davis County Causeway and ride the 50 miles of trail around the island. It’s more of an ‘experience’ rather than a mountain bike destination, but it’s a cool place to see on two wheels!

What are your favorite places to mountain bike in Utah? Leave a comment below!