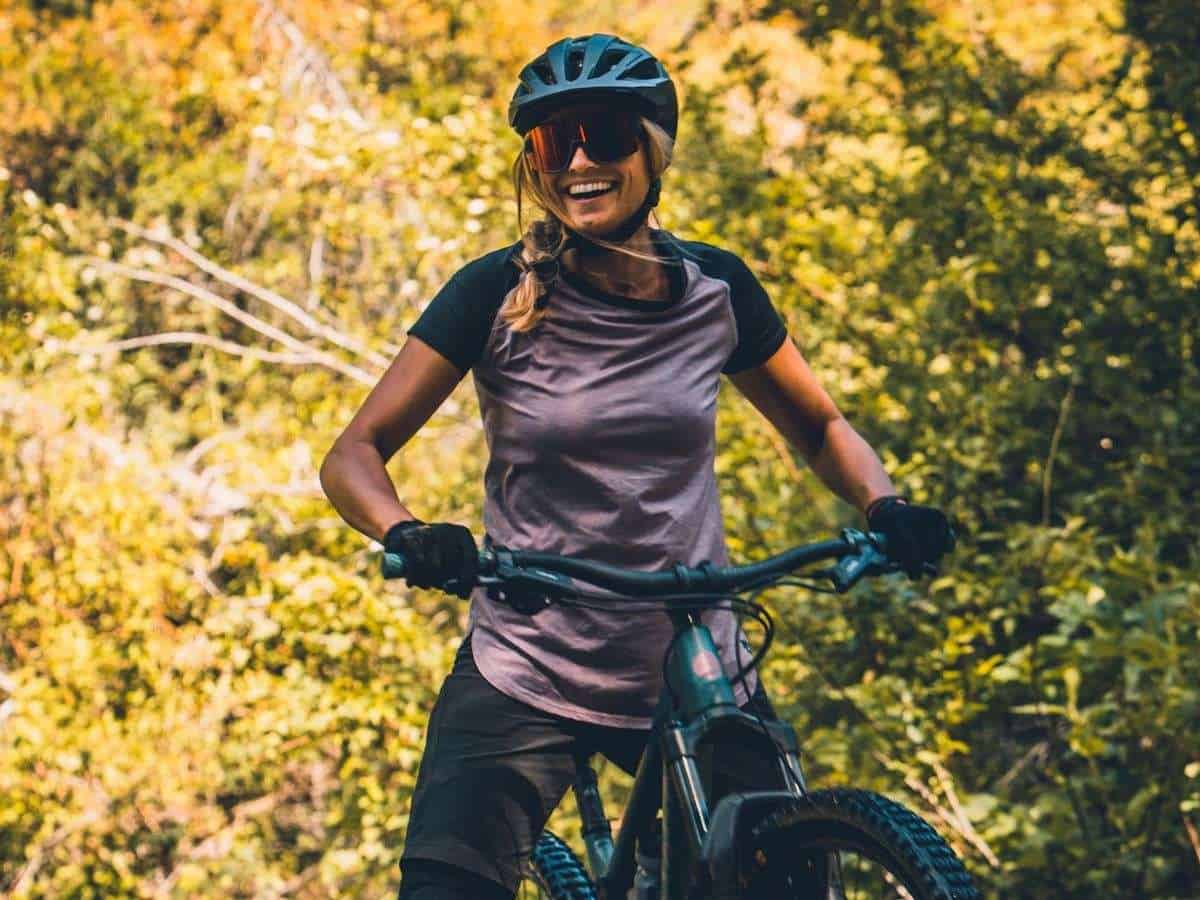 Hey lady! Is it time for a new bike? Or maybe you’re ready to upgrade your old set of wheels. Whatever your reason for shopping around for the best women’s mountain bikes, I’ve got you covered.

Women have been riding bikes and shredding singletrack for years, but only recently have companies started making women’s specific mountain bikes. The question, though, is do you really need one? And if so, what are the best options available?

What is a women’s mountain bike & How do they differ from men’s?

“A women’s bike is any bike a woman rides”

To be honest, there’s not a whole lot that sets a women’s mountain bike apart from all the ‘unisex’ bikes on the market.

Sure, some brands (like Liv) do have slightly different frame geometry which I’ll talk about below and others (like Juliana) set their women’s bikes up with lighter suspension tunes.

Let’s take a look at the main differences between women’s and unisex bikes:

Many women’s mountain bikes come in smaller sizes than men’s or unisex bikes. Women, on average, are shorter than men and sometimes an extra-small bike is needed for those ladies close to or under 5 feet tall.

On the flip side, some women’s bike brands, like Juliana, do not offer bikes in L or XL.

Also, on some women’s bikes, the top tube is curved to make it more accessible for shorter women to straddle the bike. Check different brands and models to see what options they have in your size. A women’s-specific bike may or may not be needed for your height.

In other words, Liv says that women, on average, have shorter torsos and longer legs than men and therefore require a different bike set-up.

Usually, this means a shorter top tube (shorter reach) and a higher rise (longer stack). Of course, women can swap out components like the stem to get a shorter reach, but that means relying on guesswork rather than actual science and data.

I don’t necessarily buy into this argument. There are men out there with short torsos and long legs and women with vice versa. Just like people, all bikes are different and it really comes down to what feels most comfortable to you and your body. If you demo a Liv bike and it feels right, great! But you might also jump on a Devinci (who doesn’t have a women’s line) and it may feel just as good.

Unless you’re the elite of the elite and looking to get the absolute most out of the geometry of your bike (or you have exceptionally long legs or an exceptionally short torso), it’s better to focus on feel and comfort of all bikes rather than limiting yourself to a women’s line.

As a final note, geometry differs for each bike brand. For example, Juliana bikes have EXACTLY THE SAME geometry as their counterpart Santa Cruz bikes (ex: the Roubion and Bronson below) whereas the geometry of comparable Giant bikes does differ from their sister company, Liv.

These bikes are pretty much identical

Women tend to weigh less than men (30lbs, on average according to Juliana), so therefore women need a bike with suspension that is appropriate for their weight, right? Yes, however pretty much all suspension set-ups (both front fork and rear shock) can be adjusted for a wide variety of weights by dialing in the air spring (how much air is in the shock) and adjusting the rebound (how fast the shocks rebound).

There are no women-specific shocks (that I am aware of).

That being said, Juliana (sister brand to Santa Cruz) does sell their bikes with a slightly ‘lighter’ shock tune than Santa Cruz bikes to help the bike feel more plush and smooth for lighter (and less aggressive) riders.

Women’s saddles do make a difference, but these are easily swapped out. Women tend to have wider sit bones than men and therefore a wider saddle is more comfortable.

Women’s mountain bikes will most likely come with a women’s-specific saddle, but that’s not – in my opinion – a reason to only opt for a women’s bike.

I hate to say it, but a lot of women-specific mountain bikes come in ‘female colors’ like pink, sky blue, or purple. To be fair, there are usually a few colors to chose from including less womanly hues, but it annoys me that female = pink.

I have noticed in recent years that this is changing, though!

So do you need a women’s mountain bike?

Any mountain bike you buy these days is going to be an amazing bike, women-specific or not. Many women’s mountain bikes do have a few women-specific features (like the ones I talked about above), but I just want you to understand that women don’t need to ride a women’s bike.

There are so many great mountain bike options out there, so try not to put yourself in a box. Keep your options open and try to really dial in what is most important to you when it comes to a new bike.

That being said, women’s mountain bikes can be optimal for certain cases.

Choose a women’s mountain bike if:

I really like this article by racer and Juliana ambassador Alex Pavon about why she believes women’s mountain bikes are making a big difference in the sport. It has nothing to do with the bike, but rather the fact that women’s bike brands elevate female athletes and give a brighter spotlight on women riders.

Personally, I LOVE Santa Cruz and therefore I love Juliana because they are essentially the same bikes. I haven’t ridden any Liv bikes, but they get rave reviews and there’s a strong Liv community of women riders that you can find all over the country.

If you’re new to picking out a mountain bike, be sure to read my post on how to choose a full-suspension mountain bike.

The Juliana Furtado is the equivalent of the Santa Cruz 5010. It is a short-travel bike with 130mm of suspension in the rear shock and 140mm of travel in the front fork.

The Furtado is great for cross-country riding or women mountain bikers who are just starting out. And since it has 27.5” wheels, it’s a great choice for ladies on the shorter side.

GREAT FOR: All-around shredder who enjoys a bit of everything from cross-country riding to downhill bike parks. When given the choice between pedal and shuttle, you are usually tempted to shuttle
WHEEL SIZE: Mixed – 29″ in front and 27.3″ in rear
SUSPENSION: 150 mm rear, 160 mm front
AVAILABLE SIZES: XS, S, M
WHERE TO BUY: Backcountry, Mike’s Bikes, Competetive Cyclist

The Roubion would be a great choice for someone who wants to ride it all from bike park to cross-country terrain.

The Juliana Joplin is similar to the Furtado in that it’s a short-travel bike with 120mm in the rear and 130mm in the front. Its Santa Cruz ‘brother’ is the Tall Boy. The Joplin is the ultimate cross-country bike and since it has 29” wheels, it’s a great choice for taller women, although the XS comes with 29” wheels as well if you’re looking for speed and smoothness on the trail.

The Juliana Maverick is a trail-crushing beast. With 140mm of rear travel, 150mm of front fork suspension, and 29” wheels, it is the perfect all-around riding machine.

It’s Santa Cruz counterpart is the Hightower, and if I were to recommend one bike for a do-everything rider, it would be this one.

The Liv Intrigue is a mid-travel do-it-all bike. With 140mm of rear suspension and 150mm of front fork travel and the option to choose 27.5″ or 29″ wheels, it’s a great bike that can tackle both trail riding and moderately technical descents.

If you’re just starting out and don’t plan on doing anything too rowdy, this would be a great option.

The Liv Pique is the shortest-travel bike on this list with only 100 mm of travel in the front and year. It’s a great option for cross-country enthusiasts and riders who know they don’t ever want to get too rowdy on the descents.

So are women’s mountain bikes all just marketing? Yes and no. Some women may really benefit from a women’s-specific mountain bike if they have the proverbial short torso and long legs and are relatively short in stature.

BUT this doesn’t mean that unisex bikes can’t work for them. What it really comes down to is how a bike feels, what your budget is, what your riding style is, how much you ride, and what kind of components you want.

If you’re set on getting a women’s mountain bike – go for it. They’re awesome. But know that unisex bikes are a great option for women too.