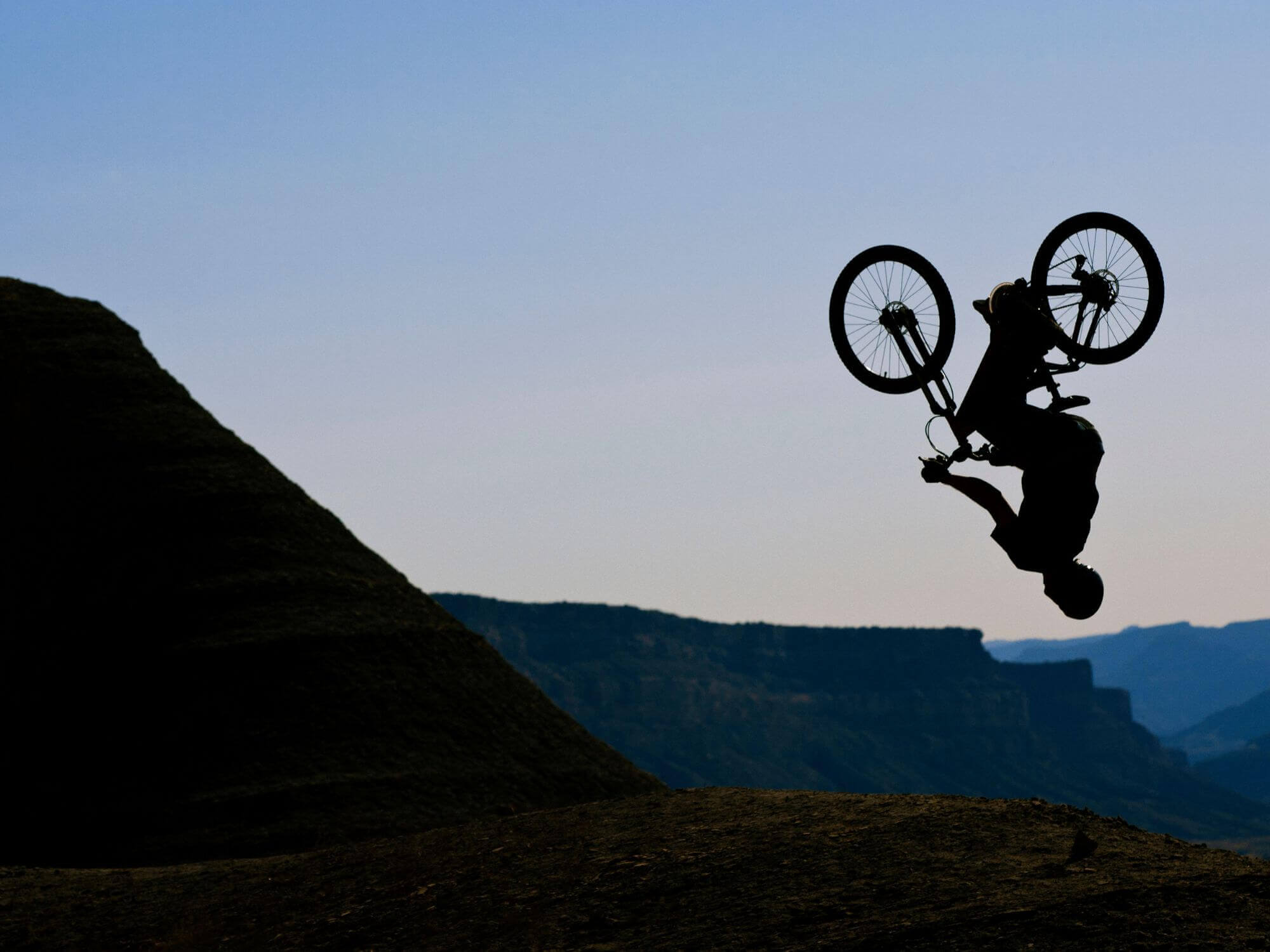 If there’s one thing that will inspire you to actually get outside and practice your mountain bike skills, it’s watching mountain biking movies featuring pro riders shredding gnarly trails and stomping insane features. They do some crazy sh*t.

Now, I’m not suggesting that you watch these films and then go outside and huck yourself off your roof (#notresponsible), but spending some quality time on the couch watching professional athletes will give you a better insight into the sport and maybe even make you a better rider.

In this post, I’ve rounded up the best freeride and downhill mountain biking movies out there that will leave you feeling stoked and more than a bit humbled.

One of the first mountain bike movies ever produced, The Collective came out in 2004 when the culture of mountain biking was taking off. It follows the progression of freeride mountain biking and the riders that pushed its boundaries to create the sport that it is today. It’s definitely one of the classics!

You won’t find the big tricks and features pro riders are hitting today, but you’ll gain a better understanding and appreciation for how the sport has evolved.

When ROAM was released by The Collective in 2006, it was revolutionary, to say the least. Some of the features and tricks in the film had never been seen – or probably even conceived – before and it created a whole new meaning to the sport of mountain biking.

Today, features may be bigger and riders may go harder, but ROAM still remains a classic.

The Collective’s third full-length mountain bike move, Seasons, is just as rad as the first two (see above). It follows seven of the world’s top riders through the four seasons of the year and what it means to be a full-time pro rider.

It covers freeriders preparing for Red Bull Rampage to DH riders looking to win gold at the world cup.

Ever wondered what it takes to be a professional downhill mountain bike racer? This full-length feature mountain bike movie delves into the lives of top DH racers and how competitive the scene really is.

The story follows racers in the 2010 DH World Series and while it may not be as interesting as ‘destination’ films, if you know the names of Gee Atherton, Greg Minnaar, and Sam Hill you’ll probably find it fascinating.

Recounting the story of downhill mountain bike racer and legend Steve Peat, Won’t Back Down is an amazing documentary that follows his life and career through every up and down. He has quite a story to tell.

Plus, the fact that Peat released this video for free during the pandemic and times of self-isolation just proves that he’s a good guy.

To help with your isolation and hopefully keep you in your houses, we have decided to put “Won’t Back Down “ online for free. This is not just my story in Mountain biking, it’s also a history lesson of Downhill and our great sport. Enjoy everyone, Cheers

Return To Earth is a cinematic journey that captures pro riders having fun on their bikes around the world. It’s a bit of an artsy film – reminiscent of David Attenborough’s Planet Earth – but it’s definitely worth a watch if you’re feeling a bit of wanderlust and want to be inspired to quit your job and just take off on an epic mountain bike adventure around the world.

[Time] is simply something that we have. Until we don’t. What really matters is how we use it.

This is one of my favorite mountain bike movies. UnReal has one of the most iconic scenes in mountain bike filmdom where Brandon Semenuk does an amazing one-shot (no film cuts) segment – you’ll know it when you see it.

The rest of the film is just as inspiring!

Five riders head north to the Arctic Circle to discover massive mountain bike lines on the remote and barren island of Axel Heiberg. Truthfully, North of Nightfall is not my favorite mountain bike video (although the cinematography is amazing), but it’s worth a watch if you’ve seen most of the iconic ones.

A visually stunning mountain bike movie that “uses mountain bikes as a vehicle to explore the ideas of creation and destruction in nature’s most beautiful, dramatic, and unforgiving landscapes.”

Follow along with some of the best riders and they explore the world on one of man’s most notable inventions: the bicycle.

Finally, a video for the ladies! It’s only been the last few years that women have come into the mountain bike scene and it’s time to put them in the spotlight. With female shredders like Rachel Atherton, Tahnée Seagrave, Casey Brown, Micayla Gatto, and Veronique Sandler (among many other talented lady riders) there’s plenty of footage to be shot.

Vision is the brainchild of freerider Veronique Sandler and it’s a great watch.

Anthill Films (previously known as The Collective) dropped Follow Me in 2010 and the filming, riding, and stoke just keep getting better and better.

While a great film, I do find it ironic that the premise of the movie is “no one rides alone – focusing on the idea that the best times we have on our bikes is when we’re riding with our friends”.

Yet they feature zero women in the film. I get that it’s 10 years old, but still…

If you’ve ridden The Whole Enchilada in Moab, then you know how crazy it would be to try to pedal up it. Well, that’s exactly what pro-rider Braydon Bringhurst did.

In the movie 8600FT, Bringhurst attempts to climb all 8600 feet of The Whole Enchilada from bottom to top. It’s very well filmed, very inspiring, and very much not something I’m going to ever do.

Released by Teton Gravity Research in 2022, Esperanto follows mountain bikers from all over the world and shows that no matter their background, gender, native tongue, or geography, two wheels are a universal language.

15. Where The Trail Ends

Throwing it back to the start of the freeride days, Where The Trail Ends is a tribute to the riders that really began the freeride movement.

The film follows a dozen top freeride mountain bikers as they search for the best unridden terrain around the world from China to Argentina and beyond.

One At A Time is a film about his 2018 season – the ups and downs, successes and losses.

A journey into fear. What motivates pro mountain bike athletes to do the things they do? Whether that thing is bombing down a DH track at unimaginable speeds or hucking oneself off a massive jump with a hope and a prayer, this film delves into the psyche of elite athletes to try to understand why and how they deal with fear.

Ever wonder what goes into building fast, flowy and fun mountain bike trails? This film digs (hehe) into the art and science of how trails are planned, routed, and built. Watch as some of the best mountain bikers in the world talk about what goes into crafting the perfect trail. It’s fascinating.

Biketown is a film about the unlikely partnerships between mountain bikers seeking awesome trails and the transformation of communities where they play.

Filmed in four towns across the US – Chisholm, Minnesota, Bellingham, Washington, Snowshoe, West Virginia and Pacific City, Oregon – Biketown dives into the history of trail building, advocacy, and of course awesome riding.

It tells the story of how mountain bikers have come to work closely with private landowners and public land agencies to transform communities – in a good way.

Do you have a favorite mountain bike movie? Is there one that I missed? Leave a comment below!