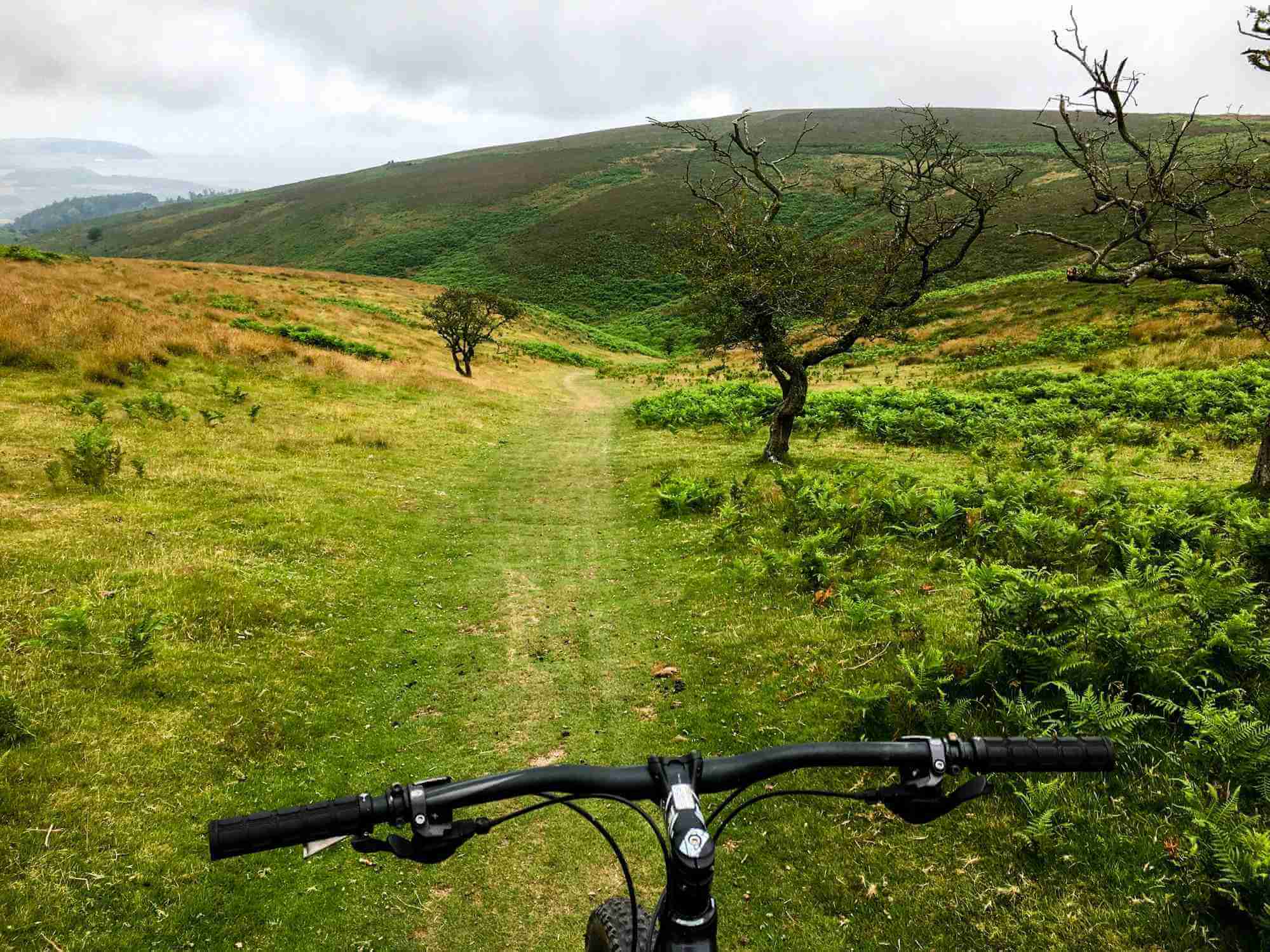 During the summer of 2017, I found myself spending 10 glorious weeks in magical and stunning Southwest England. I had somehow managed to land an amazing housesitting opportunity just north of Exeter in a small little town called Stawley.

Calling Stawely a town is actually a bit of a joke because it’s really just a few houses, some barns, and a ton of sheep. There’s not much else there other than stunning scenery and very (very!) narrow driving lanes. Think bike path width. An oncoming car meant a sharp veer into the hedges. It’s amazing I didn’t bang up the mini coupe the homeowners generously left for me to use.

But anyway, having grown up in Vermont, I’m pretty accustomed to life in the boondocks so I was in my element. The old farmhouse was beautiful. I had two black labs to love, three goats to laugh at, two degus to feed and water, and a lovely neighbor about my age to befriend.

I had also lugged my mountain bike along with me. It was my brother’s suggestion to bring it (the thought haven’t even crossed my mind) and while it ended up being a big pain to lug all the way across the pond and cost me more baggage fees than I wanted to spend, it was totally worth it. Biking, in my opinion, is the best way to explore and southwest England, I found, has some great cross-country routes.

So how did I know where to go? Well, on my first venture into the big city of Exeter, I discovered the book Southwest England Mountain Biking at a local bookstore and that was all it took to get me going. My intention was to try to ride every route in the book (there were maybe 20?), but that didn’t happen for various reasons: the rides were pretty long and I needed a few days in between to recoup, gas is expensive in England and some of the rides were over an hour drive away, the dogs couldn’t come with me so I did a lot of hiking as well, etc… But the rides I did do were amazing! Below is a rough guide to the areas that I did explore:

Exmoor National Park is a huge swatch of stunning pastoral land located on the north shore of Southeast England. The only thing you really need to know about Exmoor is that it is home to wild ponies. Wild ponies! The first time I drove into Exmoor, a herd of these beautiful creatures crossed the road single-file in front of me and I lost my shit. They were so beautiful and so majestic and I couldn’t believe that they were actually wild ponies. So freaking cool.

As for biking, Exmoor has a wide network of cross-country trails crisscrossing the park. None of the trails are technically hard, but they can be quite remote and very hilly so be sure to bring lots of water and plenty of snacks. The trails closer to the coast have amazing views out over Bristol Bay and the trails farther inland are peppered with sheep and wild ponies.

The Quantock Hills is another expanse of beautiful English countryside on the north shore of Southeast England. A bit smaller and a bit more forested than Exmoor, it still has wild ponies and the trails are more rugged and steep (in both directions).

There are well over 100 miles of trail spread out through the Quantocks and each ride offers something different and unique from fast, flowy descents through forested groves to ridge riding with epic views, to cross-country rides through meadows and wildflowers. Just be prepared to huff it up some steep grades.

Dartmoor National Park is unlike any other place in England and the riding there is arguably unparalleled as well – both in scenery and technical terrain. Granite tors rise up from the misty moors, streams and rivers cut through the hills, wild ponies graze majestically on the plateaus, and so much more. Dartmoor is a magical place. Plus, the names sound like places straight out of Harry Potter

Haldon Forest isn’t in the Southwest England Mountain Biking book, but this park does deserve a mention because it has some awesome and well-built trails for a wide range of levels, including a skills park.