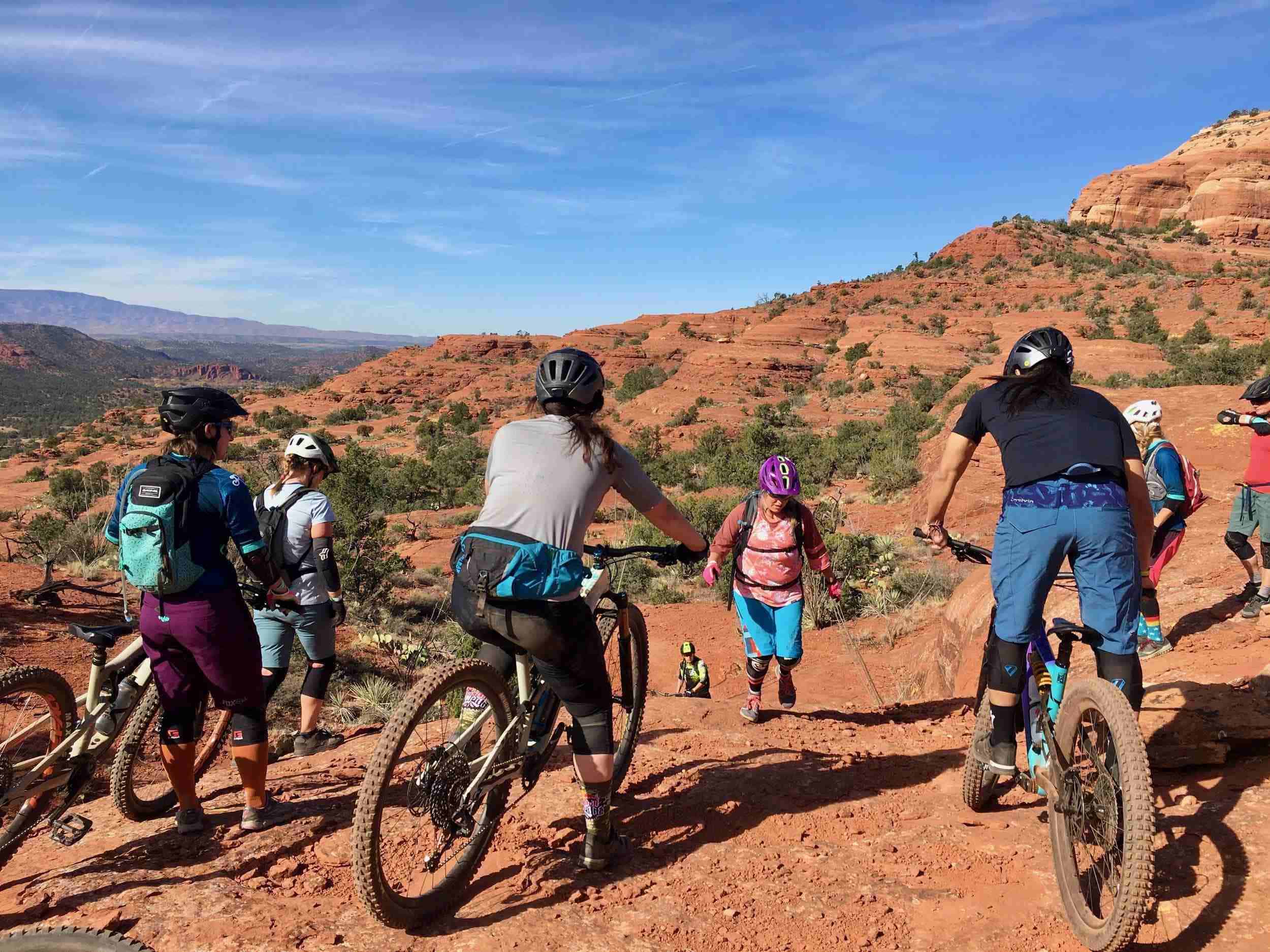 What can I say? It was awesome! Truly rad. Three days of shredding the redrock Sedona trails (#shredona) with 300 women riders from all around the country (and world) with skills ranging from newbies all the way up to pro racers. There were demos galore (although I chose to stick to my trusty SC Bronson steed), free snacks, vendors with all the beta, workshops & talks, films, free drinks, dancing, music, good food, a ‘really fast raffle that doesn’t suck’, and group rides to suit all levels and abilities. Plus, if you haven’t been to Sedona, it is one of the most beautiful places in the US and home to some of the best riding anywhere. Seriously, what more could you want?

I first heard about Ash and Andi from Roam and all the awesome things they do about a year ago when I was searching for cool mountain biking adventures that I could get myself involved in since mountain biking – if you haven’t gathered – is what I live and breathe. When I saw the Sedona Roam Fest on the schedule I was like “hell yes” and then almost didn’t get to go because I procrastinated so long before buying a ticket. BUT I did make it and it was awesome. I signed up for the Fest as a solo shredder and while I’m used to riding by myself I was a bit nervous to attend alone. But that awkwardness quickly dissipated when I hit the trails on my first group ride. Lady shredders are rad. (Although TBH, I’m not sure I would attend solo again).

The ensuing three days were filled with a myriad of group rides (I opted for 5 advanced rides in three days which has resulted in 650 sore muscles), fun sessioning opportunities, photo ops, techy climbs, legit descents, and epic 360° views of Sedona splendor. I ultimately didn’t take advantage of everything that was offered (I’m lame and skipped the dance party), but I do feel like I got what I wanted out of the experience and I’m excited for the magic of future Roam Events. Below is a little recap of what to expect for your first – or next – Sedona Roam Fest.

Sedona is a mountain bikers paradise. It is legitimately my favorite place to ride (as of yet) and the surrounding area is so beautiful that it probably should have been a National Park in hindsight. But thankfully it isn’t because then we wouldn’t be able to ride in this scenic and fabulous place!

Roam Fest is hosted by Red Agave Resort in the village of Oak Creek, about 15 minutes from downtown Sedona (although the traffic here is so terrible that it often takes two or three times that to get anywhere).

Steps away from Red Agave are several networks of trails and you can literally hop right onto and link up a handful of very different routes suited for any rider. More about the trails below!

Getting there: driving to Sedona is obviously the easiest option, but if you’re flying from afar you can either fly directly into Sedona (a bit pricey) or opt for Phoenix or Flagstaff. Then either rent a car or there’s a shuttle that runs between the Phoenix Airport and Flagstaff that stops in Sedona.

Where to stay: I am crazy lucky that my mom lives in Sedona (please don’t move, mom…) but if you’re looking for accommodation you have a few options:

Red Agave: stay right at the resort and be in the center of all the action!

Camping: Roam-goers have the option of adding on camping when you purchase tickets. I haven’t been to the campground, but rumor has it that it’s pretty primitive and there are no showers…

Airbnb: If my mom didn’t live in Sedona I would for-sure opt for an Airbnb because I’m a princess and I don’t like sleeping covered in dirt and sweat

Bike shops: Absolute Bikes is minutes away from Roam base camp and they’re super friendly and accommodating. There’s also Over The Edge Sports in West Sedona

Hold on to your hats because the group rides at Roam Fest are the bomb! I did five group rides and all of them were amazing. The ride leaders were stellar, the routes were well-devised, the camaraderie was energetic, the pace was manageable, and the sessioning was on point. I loved every minute of them. (Although I did hear from a ride-leader friend that her novice/intermediate rides were not as cohesive, so make sure you sign up according to your abilities and skills).

There are over 30 group rides scheduled each day, so there are plenty of options to choose from depending on which trails you want to ride, who you want to ride with, what your pace is, and how technical you’re looking to get. Some of the rides leave straight from the Red Agave base camp and others require a shuttle, so be sure to show up on time and be ready to go.

The group rides and all the information surrounding routes and levels are posted on a big board in the demo area and they’re also emailed ahead of time. You can either sign up for rides at the board or at the demo tent that is hosting the group ride. (For example, I wanted to do an Advanced ride with Specialized, so I signed up at their tent and met the leaders in front at the appointed time).

It is a really good idea to do some research beforehand to understand what the trails and terrain look like before signing up for group rides. Watch videos, pour over TrailForks, google trail features and images (and remember that everything looks easier and less technical than in real life). In other words, be prepared. Sedona riding is no walk in the park.

Below are the rides that I chose to go on. The letters correspond to the area that the trails are in. For example, VOC refers to Village of Oak Creek and HISCH is High School. The ride schedule is released a few days before the Fest, so do some research and get a general sense of which trails suit your riding abilities.

VOC 5: Slim Shady > Hiline > Templeton (I did this ride twice)

There were over 150 bike demos at Roam Fest this year and while I didn’t choose to demo, I heard really good things about the options available. Yeti, Juliana, Specialized, Pivot, Liv, Niner, Rocky Mountain, Ibis all had their tents and demo stations set up and were ready and waiting for lady shredders to take their top-of-the-line rigs out for a test.

Why didn’t I demo? Truthfully, I love my 2020 Santa Cruz Bronson and it’s still newish to me, so I wasn’t ready to check out something else. Also – and this is a big one! – if you’re planning on doing some of the crazy trails like Hiline, it’s not a great idea to hop on a bike that feels and acts differently than the ride you’re used to. I personally wouldn’t have been comfortable bouncing down the chute or tackling the lower rock garden on a bike that I only started riding a few hours earlier.

What else is there to look forward to?

Talks and Workshops: Sprinkled throughout the weekend were several talks and workshops put on by vendors and professionals. There was a RockShox suspension workshop, Ergon saddle fitting, a panel with pro racers Anneke Beerten and Vaea Verbeeck, how to pack up a bike with Bike Flights, and so much more. I honestly didn’t take advantage of most of these talks and workshops because I just wanted ride, but it was great to have the option!

Happiest Hour: The happy hour was probably my favorite ‘extra’ of Roam Fest. At the end of the first day, each vendor flipped their tents from showcasing bike products to offering a wide assortment of appetizers and booze. There were cheese plates, chips and guac, bruschetta, margaritas, palomas, wine, beer… it was a ton of fun and a great way to mingle and meet new friends.

Helpful and Friendly Vendors: So many vendors! There were all the bike demo tents as well as Dakine, Shredly, BC Bike Race (who had the best snacks), Sram, RockShox, Sierra Nevada beer (free beer starting at 11am!), and more. Each tent had swag and snacks and super friendly reps.

“A Really Fast Raffle That Doesn’t Suck”: Exactly what it sounds like. There were some pretty sweet prizes like a Niner bike frame, a wheelset from Industry Nine, a RockShox fork, and lots of other awesome giveaways. Sadly, I didn’t win… but all proceeds went to World Ride, an organization committed to improving the lives of women in developing countries through bikes.

Dance Party: Animal costume themed…. I didn’t attend but seeing a T-Rex riding up the road on a bike was definitely a highlight of the weekend.

Sedona Roam Fest 2019 was a blast. The riding was amazing (as always, Sedona never disappoints), the energy of the festival was awesome, I met a ton of amazing and wonderful women shredders, and I left inspired and exhausted. It was a super fun weekend and the event coordinators did an incredible job putting together such a fun and entertaining event.

So will I sign up again next year? Yes… but not as a ‘single lady’. As much as I am an independent traveler and enjoy riding solo and meeting new friends, I think Roam would be a lot more fun as a group – or at least with one other companion. Truthfully I felt like a bit of an outsider when not on a group ride and I think I would have stuck around for some of the other activities – like the dance party – if I had a friend or two to join me. As such, I’m not sure I would recommend going alone unless you volunteer or are an extrovert and thrive on the energy of a big crowd. That all being said, the people behind Roam put on an amazingly inclusive event and it is SO AWESOME to see so many women riders get out and hit the trails and connect over the best sport ever.

Final note: Roam does host smaller, more intimate women-only or coed retreats that I would be very interested in attending. I think they would be a better suited for solo riders with a tendency toward introversion 🙂